The Government Document Collection includes numerous documents, mainly from the Ontario Ministry of Education (formerly the Ontario Department of Education) that cover the areas of elementary, secondary and teacher education in the Province from the mid-nineteenth century to the present day. The collection can be accessed by searching the library catalogue. Some Ontario government education documents and curricula from our historical collections have been digitized and are available via the Internet Archive.

The collection includes Ontario curricula issued by the Department/Ministry of Education for elementary and secondary levels from 1871-1995.

Curriculum support materials in the collection include the Circular 14 approved textbook lists, resource guides for specific programs and units, and radio and television program schedules and teaching guides from the Educational Television Branch. 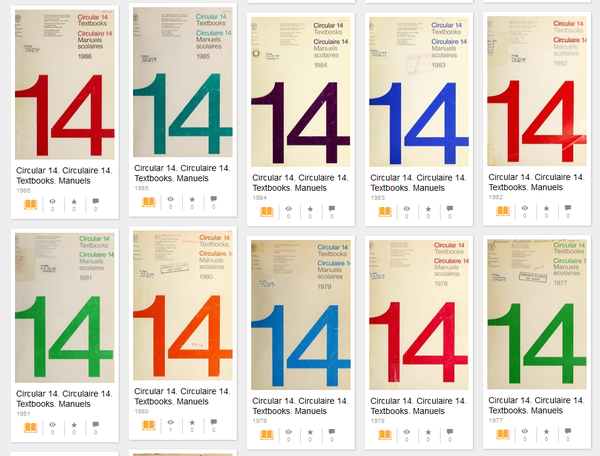 Circular 14 was a publication issued by the Ontario government and provided to school boards from 1887-1996. Circular 14 publications listed the textbooks that had been reviewed and authorized for use in K-12 classrooms. They also contained information about government policies related to the provision and selection of textbooks in Ontario.

Circular 14 was issued in English from 1887-1973 and as a bilingual English and French document beginning in 1974. With the exception of its early years, the circular was published annually in January. From the years 1952 to 1991, two supplements (Circular 14A, released in the spring, and Circular 14B, released in the fall) were issued with updated listings. Beginning in 1971, the circular included an index of textbooks at the back, with page numbers indicating the levels and subjects for which the books were approved. Issues from 1979 and later also include a list of textbooks removed from the previous year's list.

Many of the texts listed in Circular 14 are held in the Ontario Textbook Collection. More information about Ontario's current authorized textbooks, the Trillium list, can be found on the Ministry of Education website.

The collection includes documents containing policy and guidelines for school management and opening and closing exercises for public schools, as well as programmes issued by the Department of Education for the observation of special days (e.g., Empire Day, Commonwealth Day, and Remembrance Day).

The collection includes directives and memoranda issued by the government of Ontario to school principals. Current memoranda can be found online at the Ministry website.

The collection includes documents concerning the physical setup and design of schools and the establishment and management of school libraries.

The collection includes government regulations and acts related to public school education from the mid-19th century to the 20th-century.

Reports in the collection include the Annual Report of the Department of Education; early financial reports; and reports from 19th-century and early 20th-century education researchers on technical education, educational exhibitions, examinations, and visits to schools in Canada, the United States and Europe. More recent reports are also included.

Commissions on Education in Ontario

More information about Ontario government documents and other primary source materials can be found in the research guides listed below.