ENGD89 - Topics in the Victorian Period

A Note on Finding Poetry and Critical Writing about Poems

When looking for poems, and critical writing about poetry, it is important to keep in mind that the title of an individual POEM is not necessarily the title of the work in which the poem appeared.  Poems may have originally appeared in magazines, or annual collections of poems for example.  Even if the author's poems were published in book form, the title of a collection of poetry may not be the same as the title of the poem that you're interested in.  In fact, many collections of poetry are simply titled "Poems".  Alternatively, poetry may have been published in more comprehensive anthologies of the author's writing titled simply "Works" or "Collected Works".

This aspect of poetry publication is important to keep in mind when searching the library catalogue as well as the various literary databases.  In the catalogue, the database record for a particular collection of poems will rarely include a listing of all of the included works of poetry.  See, for example, this catalogue record for "Poems" by John Ruskin: 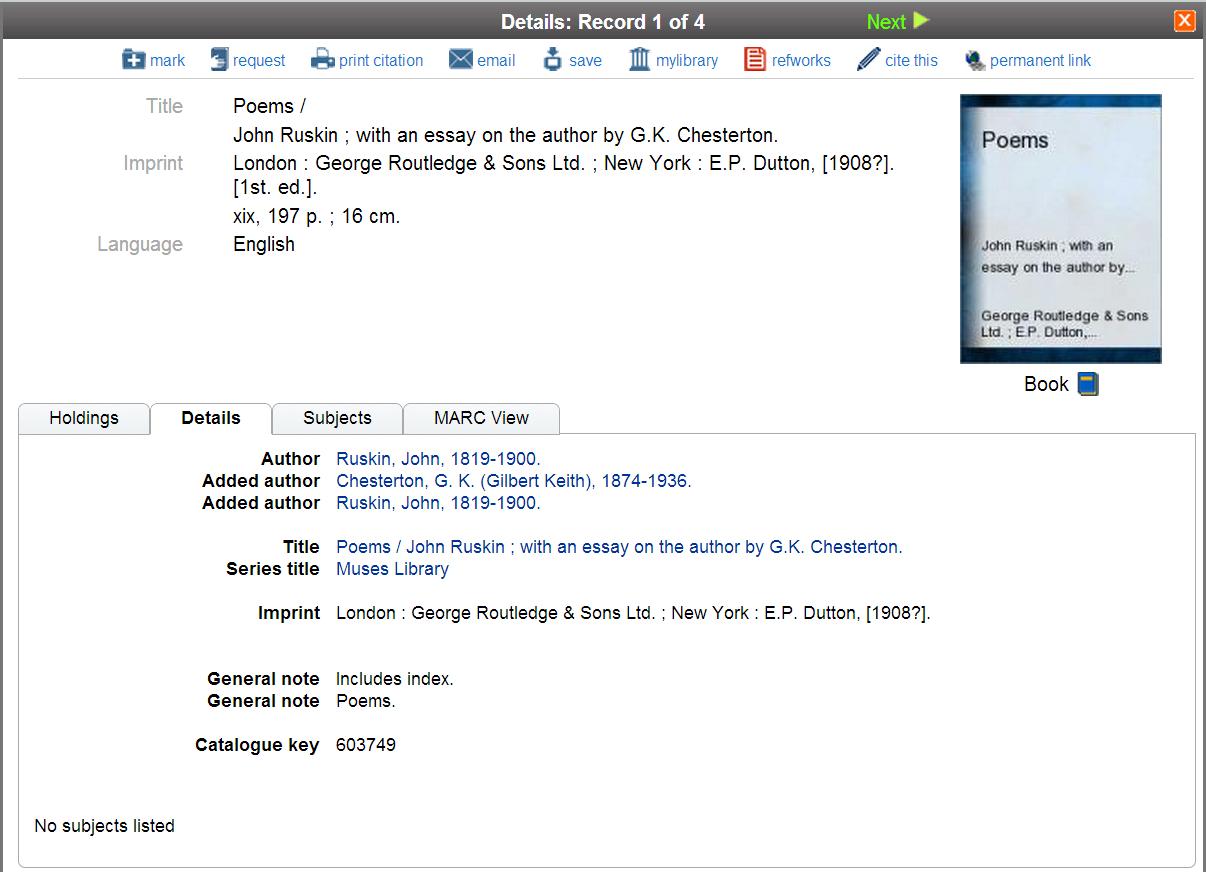 All that we know for certain is that this is a works entitled "Poems" by John Ruskin, so we'd need to go get the book and look in the table of contents to search for individual poems.

Finding lists of publications by an author, and more about an author's life and works:

Here are two good resources for finding out more about your author's various literary works, and their life generally (remember, however, to always be careful about assuming that some specific aspect of an author's personal life is necessarily reflected in their literary work!).

The Oxford Dictionary of National Biography:

The Oxford Dictionary of National Biography is the national record of men and women who have shaped British history and culture, worldwide, from the Romans to the 21st century. The Dictionary offers concise, up-to-date biographies written by named, specialist authors.  It is a great resources for learning more about British authors, including learning more about their publication history.

A Dictionary of Writers and their Works:

This guide to authors and their works focuses on the general canon of British literature from the fifteenth-century to the present. There is also some coverage of non-fiction such as biographies, memoirs, and science, as well as inclusion of major American and Commonwealth writers. This is a great resource for finding a simple chronilogical list of an author's publication history.