Recently, the issue of "fake news" ("news" stories containing misleading, or outright false information) has been a source of much discussion and debate. U of T Librarians have created two research guides that will provide you with some good "tips and tricks" for recognizing, evaluating and avoiding false and misleading information that is published (online, or in print) under the guise of legitimate "news".

The U of T Libraries' "How do I spot Fake News" FAQ: https://onesearch.library.utoronto.ca/faq/how-do-i-spot-fake-news provides links to some good websites to use to check the veracity of stories you find online, tips to spotting "fake news" and separating it from legitimate sources of information, and some further reading on the "fake news" phenomenon.

At UTM, Librarian Pam King hs also created a slightly more in-depth "Library Academy" guide to "fake news": http://guides.library.utoronto.ca/utmlacadfakenews This guide will help you to categorize various types of misleading information, and provides a number of valuable tips on recognizing the signs of inaccurate information online, and searching for more credible sources.

Judging the Reliability of Sources

When evaluating news, especially scientific news, it is important to take some time to evaluate the reliability of your news source.

With news media, articles are generally written by non experts, for a non expert audience. This means that the accuracy with which the science is described is sometimes in question. Perhaps the science is legitimate, but the journalist does not fully understand it, and so it is presented in a way that make it appear false. Of course, the opposite can also be true. The science may not be accurate, but a journalist who doesn't fully understand the science may present it as being not only "true" but "established by experts". Finally, quite often in the news media the conclusions based upon the science can be misconstrued, or misrepresented.

Below is an infographic that went viral in 2016 after it was posted to Facebook. (a quick note here that when you find an infographic in a scientific context, be cautious. Summarizing science in an easily digestible way like images and charts can also sometimes misrepresent the science!).

This graphic deals with political news, not scientific news, but the basic principles are the same. Here, the higher on the chart, the more complex and lengthy the news pieces from that source are (long magazine articles as opposed to a short newspaper articles, for example). From left to right is the perceived political slant of the source, from VERY liberal to VERY conservative (this is of course somewhat of a subjective analysis, as the creator of the graphic would be quick to point out!). A similar chart was created by users on Reddit, which is interesting to view in comparison to this one, which highlights some of the subjectivity involved in these types of media analysis. 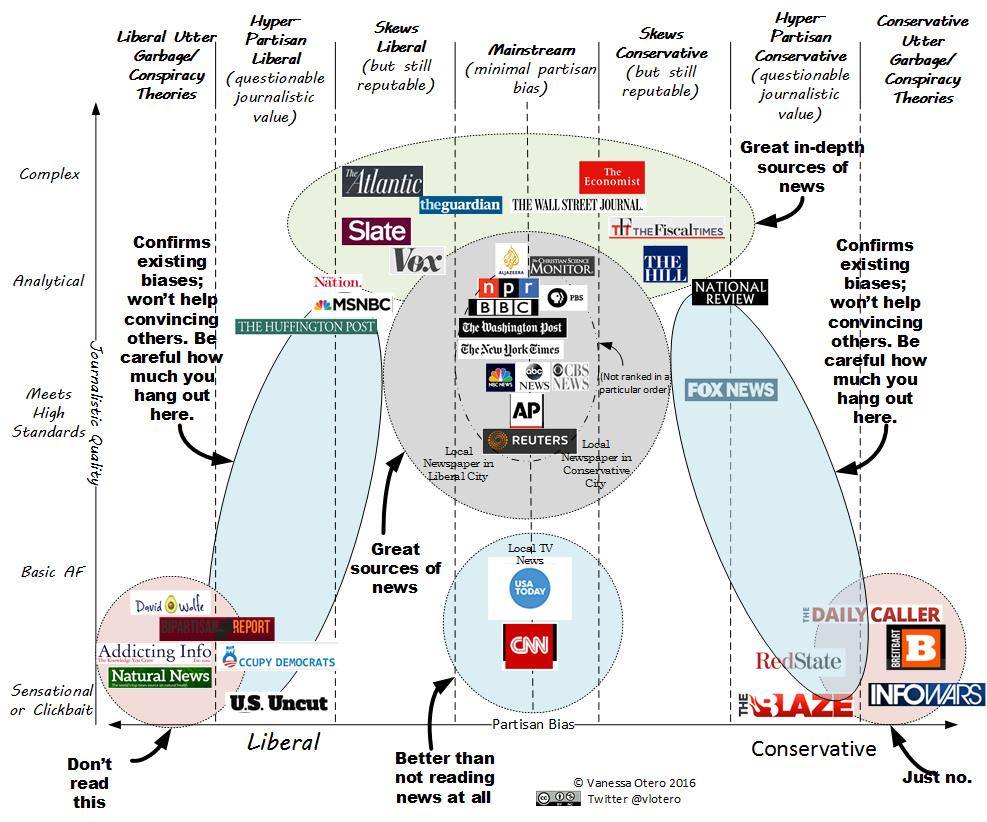 When evaluating SCIENCE NEWS you can take a similar approach. The length and depth of the news piece is important (For example, is it a quick segment on CBC News right before the commercial break, or a 10 page special report in Macleans Magazine?). The, rather than analyzing the political perspective of the article, you can analyze the quality of the scientific content, and the expertise of the author(s).

Questions to consider in evaluating news articles about scientific topics:

The answers to these questions will hopefully assist you in evaluating the reliability of the science news that you're reading!

(Here's an updated version of this chart, with an analysis by its author, and here is an analysis of the chart by a law professor).