A short guide for helping with lab design and for locating empirical studies modeling experiments on human memory and recall.

It is hard to design an experiment. Here is a quick guide from Science 101 at the University of California at Berkeley: "Design your own science experiment." Be sure to read the second page where all the good stuff is:

Here are some definitions adapted from the Science 101 page:

For example, let's say your research question is "How should I spread ice-melting salt granules over an icy sidewalk to get the fastest ice melting action with minimal environmental side-effects?"

Your hypothesis may be: "Size of salt granules affects the ice melting action. IF I reduce the size of granules so as to spread them out more evenly, THEN I will get faster melting with same amount of salt used BECAUSE I will be able to improve area coverage per gram of salt."

So now you can get started!

Please refer to page 10 of the Publication Manual of the APA (2010) for more details on experiments in psychology. We have print copies of the Manual in the library at the reference desk (call number BF76.7 .P83 2010). No completely electronic copies of the 6th edition are available.

Here are the sections of a lab report, also described on page 10 of the APA Publication Manual:

You may want to use this handy Assignment Calculator to help you with planning out and writing up the lab report. Be sure to select the Lab Report option: 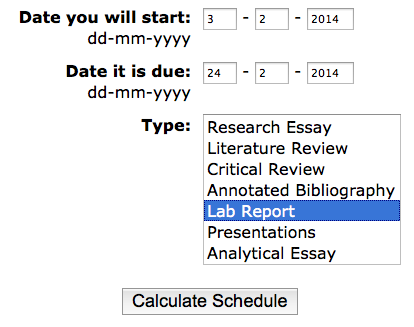 To find empirical studies as models for your look for peer-reviewed journal articles reporting original research and refer to the tab in this guide called Find Articles.

University of California Museum of Paleontology. (2014). Design your own science experiment. In Understanding Science. Accessed on 3

For a quick look into the basics of memory, including the role of recall, take a look at these two web-based resources:

February 3, 2014, from the Gale Virtual Reference Library at