Compiled by Archbishop Thomas Cranmer and first published in 1549, the Book of Common Prayer is a product of the English Reformation and is one of the most influential books in history.

With British imperial expansion, the Book of Common Prayer became a prime instrument of English culture. When the Puritans fled to America in 1620 it was to escape the discipline imposed by of the Book of Common Prayer. The 1637 version triggered a rebellion by the Scots. In due course, it became a global book: it was the first book printed in many languages, from North America to southern Africa, to the Indian sub-continent.

For centuries it has formed the order of worship for churches in the Anglican Communion and beyond. Many variants are to be found in churches inside and beyond the Anglican Communion in over 50 different countries and in over 150 different languages. Traditional Lutheran, Methodist and Presbyterian prayer books have borrowed from the Book of Common Prayer, and the marriage and burial rites have found their way into those of other denominations. 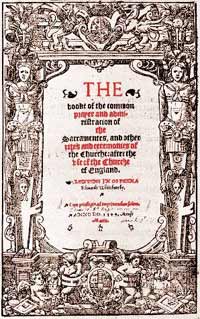 Modified in 1662, the Prayer Book remains at the heart of our worship, and is the official doctrinal standard of the Church of England, as well as of most other Churches in the worldwide Anglican Communion.

Phrases from it such as ‘Till death us do part’, ‘peace in our time’ have come into everyday use. After the Authorized (King James) Version of the Bible, the Book of Common Prayer is the most frequently cited book in the Oxford Dictionary of Quotations, and is one of the guiding influences on the English language.

The Collects, the special prayers for every week and season, often express devotion in ways that otherwise would not be easily put into words. No book of services is based more closely on the teaching of the Bible, with words often drawn directly from biblical passages.